Mount Sette Termini ows it's name to the ancient seven boundary stones (termini) that were planted into its sides. It is a soft and woody hill, but in spite of its small size it offers some interesting landscapes. The high concentration of military tracks and fire roads make it fertile ground for bikers, but the absolute lack of signs turns it into a labyrinth where, if you yield to the temptation of exploring one of the countless minor trails that you'll cross, you'll inevitably end up getting lost.

Because of the amount of intersections and of the lack of signs, you should follow this itinerary only with a map and a GPS.
The starting point is Cugliate, a small village in Valganna. Head west on the main paved road and follow the signs to Montegrino. After 3 kilometers you'll get to Castendallo, where you'll meet an intersection. Follow the road that climbs east (Via Roverpiano). At the next intersection follow the sign towards Sette Termini; here you'll enter the woods. The road climbs gently and the hairpin turns allow you to raise the pace (or just to breath, depending on your physical conditions)... 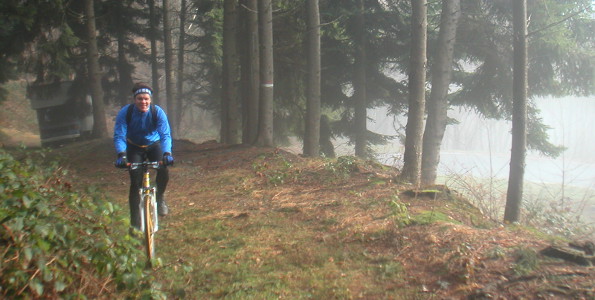 After 4 kilometers of easy climb, you'll get to a bifurcation, where you'll have to head right. After 3 more hairpin turns you'll get to the Sette Termini's restaurant. Keep on riding on the paved road, which will now start descending, and at the first hairpin turn leave the cement and take the fire road on the left. In a few minutes you'll get to the summit, a meadow that has been conquered by a few birches. Along the road you'll meet some wrong trails, but following the signs you should be able to find the right one. 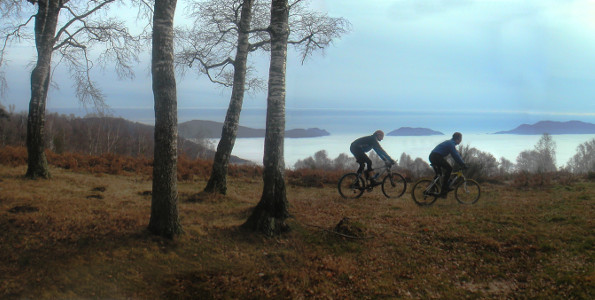 To head down you can use the western fire road (look for the white and red signs), that runs through the former pastures now invaded by ferns and takes you back to the paved road you just climbed. If you follow down the road to the first hairpin turn, you'll meet another fire road that heads off and goes through a thick pinewood (keep following the white and red signs). The fire road gets steeper and tighter, and it quickly turns into a hiking path. 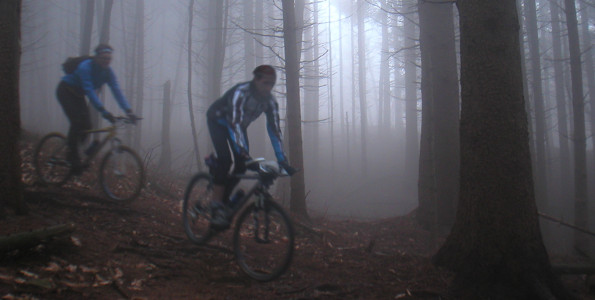 Along the descent you'll cross a few other tracks, which you'll have to ignore. Further down the path you'll get on the paved road again (elevation 720 m). After a couple of hairpin turns you'll find the gravel road that heads towards Marchirolo. Follow it, and after 3 kilometers packed with steep ascents, you'll get to another paved road. You're at Colle La Nave (813 m), a pass that connects Mount Sette Termini with Mount la Nave. 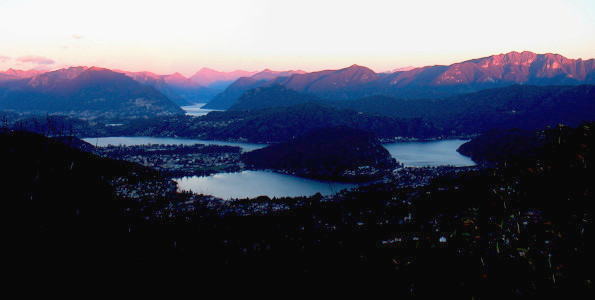 Ride down the paved road for a few meters and then, once you get at the lowest point, take the gravel road on the left. Follow the signs to San Paolo: you'll go through some more short but tough climbs and you'll arrive at the ancient and lonely church of San Paolo, that offers a magnificent view over Lake Ceresio. Go past the church and you'll start going down, until you'll get back to the paved road. Now you just have to ride it down to get back to Cugliate. 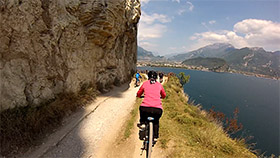 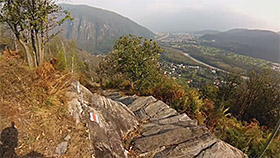 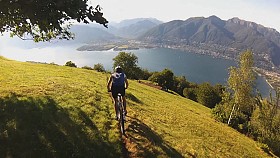 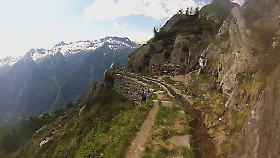